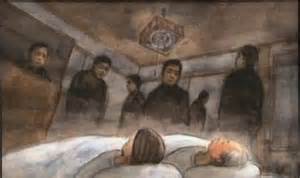 Lift High the Cross is a 19th Century English hymn. It was written by George Kitchin and altered by Michael R. Newbolt in 1916. It has been suggested the hymn was inspired by Constantine the Great’s conversion to Christianity and seeing a cross which had the Latin version of “In this sign thou shalt conquer” written on it. Kitchin wrote […]

Jehovah Helech ‘Olam means the Lord King Forever The Lord is King for ever and ever;    the nations will perish from his land.    Psalm 10:16

Simple Gifts is attributed to Joseph Brackett, a member of the Alfred Shaker Village. It was composed in 1848, and relatively unknown until Aaron Copeland used the melody in the score of Martha Graham’s ballet Appalachian Spring, first performed in 1944. Copeland used the song a second time “in 1950 in his first set of Old American Songs.” Several Shaker […]

Jehovah Hashopet means the Lord my Judge The LORD is our judge the LORD is our lawgiver; the LORD is our king; he will save us.  Isaiah 33:22 I have not wronged you, but you are doing me wrong by waging war against me. Let the Lord, the Judge, decide the dispute this day between the Israelites and the Ammonites.”     […]

Andrew Murray writes with a heart of humility and a heart for the Lord. His writings in the Essential Andrew Murray Collection will bring you closer to the Father in your walk and is a great addition to your personal quiet time. the collection includes three of his classics Humility, Abiding in Christ, and Living a Prayerful Life. *I received […]